Next in our new ‘Player Value’ series, we ask: Could Lamela get his starting spot back?

One eye on the past – Lamela spent just over a year out injured and returned in November 2017. When he returned, the player he is most likely to replace, Son, was on fire, which resulted in limited game-time for Lamela.

Focusing on the short-term – which is not advised as a good approach generally speaking, because any player can have a couple of good games (but is necessary in this case because of his limited game-time) – he achieved an average of 2.8pts per game (goals, assists & bonus points) – which is good versus our value for money target of 2.3pts per game (4.3 including appearance points).

Long-term he only averaged 1.1pts per game and while he wasn’t injured during this period, there was a lot of substitute appearances.

One eye on the future – The important considerations at Spurs in their opening fixtures, are: Son – who will miss the first 4 games of the season due to playing for his country in the Asian games and Alli & Kane who are likely to miss out on game time at the start of the season, due to their World Cup exploits, therefore Lamela has a great chance at starting regularly, at least until Son returns.

Our algorithms are predicting Spurs should make their opposition look poor to average in each of their opening five games and could score up to 4 goals in two of them (NEW and WAT both away). Lamela’s record versus similar opposition looks to have potential, with an average of 0.6 big chance involvement per game (despite his limited game-time).

What to do? – first and foremost, we need to be confident he will play, because while the indications are that he will, we will know better as the season gets closer. But if he plays, at £6.5M, he should provide fantastic value for money.

The trick is knowing when to jump off – but who knows, if he is playing well, he may well keep his place ahead of Son (which was the case in 15-16 & 16-17 seasons) and if he keeps his place, he may well end up being a season keeper.

FPL Tip: in order to make better informed decisions, understand factors like injuries or games missed for other reasons, that might influence a players immediate future. 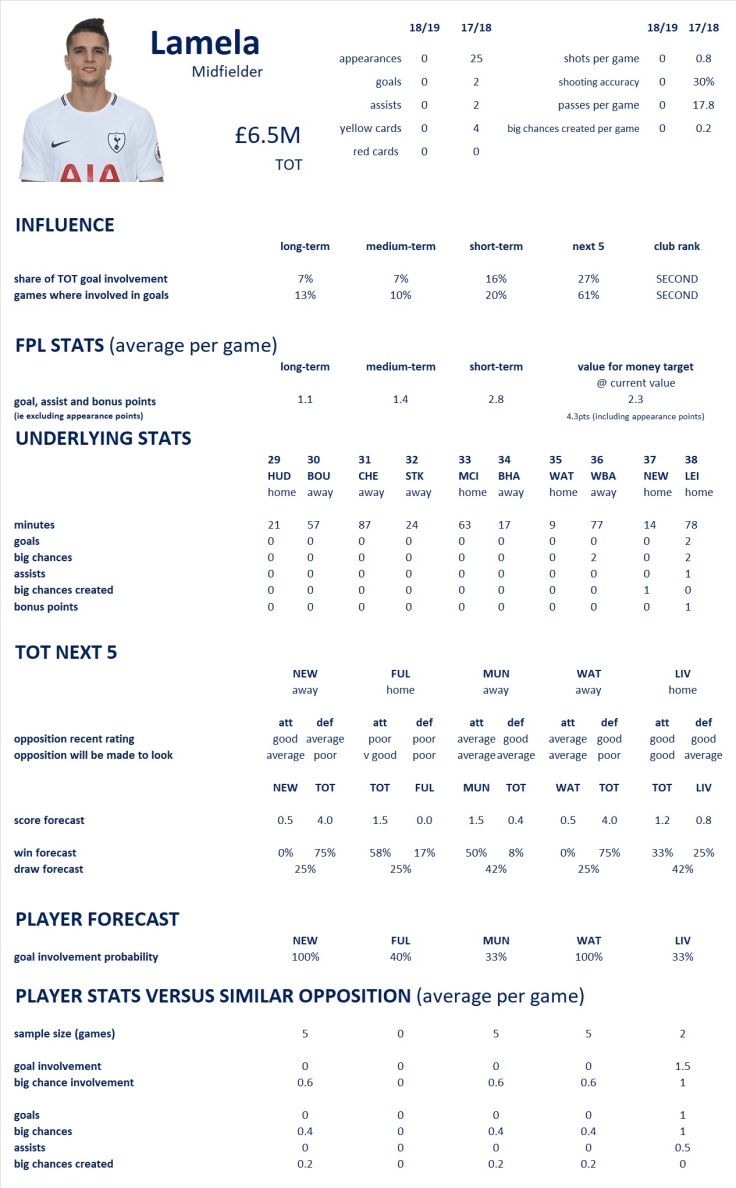