Jose has declared his pre-season is focusing on Sanchez, Mata and Martial as his front three (because of players to be rested following the World-Cup) – last but not least, is Juan Mata

One eye on the past: In the long-term, he has an average of 0.4pts per game (goals, assists & bonus points) – which is woeful versus our value for money target of 2.3pts per game (4.3 including appearance points).

His game-time has been a critical factor in this and is clearly visible in his last ten fixtures, where he played good minutes in half and came on as a sub once.

So Mata has the opportunity to improve with the promise of game-time, but we have to be mindful that double the appearances might only return double the FPL pts, which will still leave us short of our target. That said, you’d like to think that a little consistency will help him.

One eye on the future: There is a mixed bag forecasted as far as Man Utd’s opening fixtures – they should score a couple per game at home, up to 3 goals versus Burnley in week 4 but might struggle to click versus Brighton and Watford. But all in all there are goals to be had across the period, it is just a matter of who grabs them.

The worry for Mata is his poor historical returns versus similar opposition, with only an assist or big scoring chance every five games. Also, he is ranked fifth in our forecasted influence rankings – mainly due to a lack of game-time.

What to do: Mata is a fantastic player no doubt, but seems to severely lack in the goal-involvement portion of his game in this Mourinho side, which is of course what we, as FPL managers, are mainly interested in.

He is, however, cheap enough, at £6.5M, to be considered the type of player you might want to gamble on and at that price, it’s not that big of a risk to take. But there is not enough evidence to even suggest that we have a remote chance of returns, let alone a good chance. So for now, we advise to stay clear.

FPL Tip: The FPL community goes crazy when a manager spells-out how they are going to approach games, but you need to detach yourself from hopeful what-ifs, and attach yourself to probable outcomes. 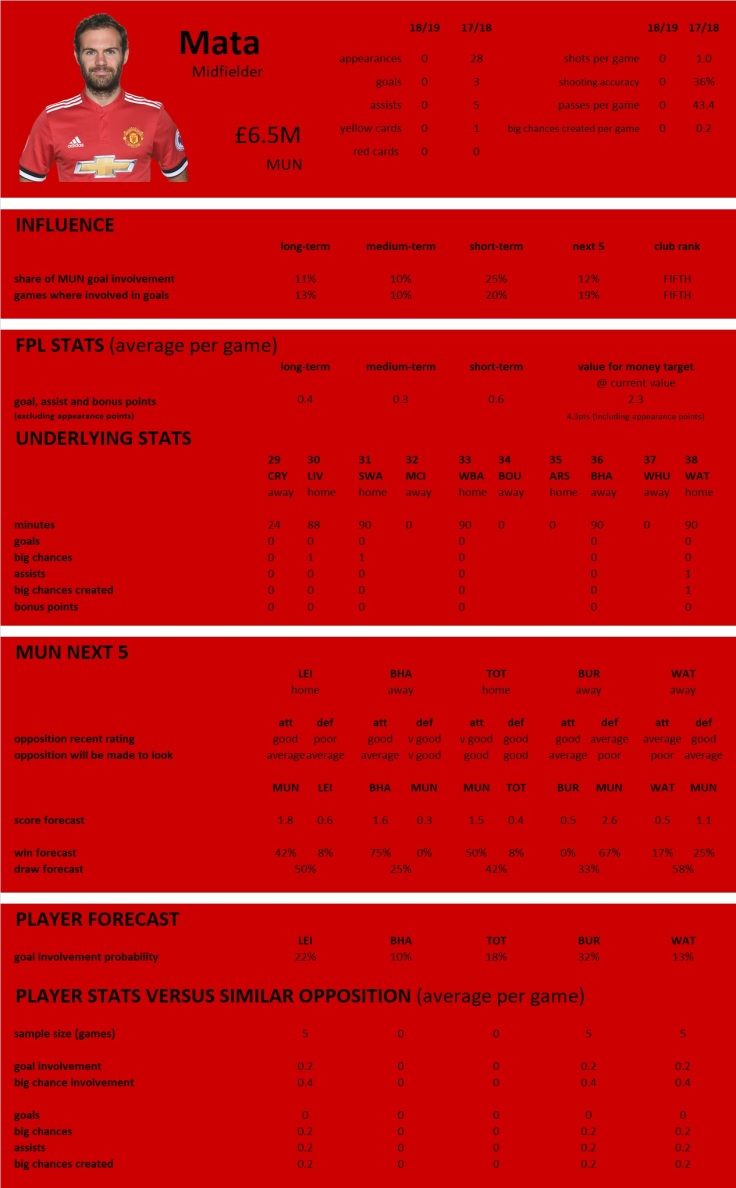