The fixtures have been arriving thick and fast as we’re firmly in the middle of the winter fixture congestion, and a few bandwagons have started rolling over the past few gameweeks.

Here, we’ll get back to having a look at which players could potentially become/are becoming bandwagons, looking at the next few gameweeks ahead.

Looking at the current FPL transfer targets, Marcus Rashford’s stock has continued to rise after scoring his 7th goal in 8 games this week, becoming the fourth player to break the 100-point mark in FPL this season. He was mentioned in our GW13 Bandwagon preview. 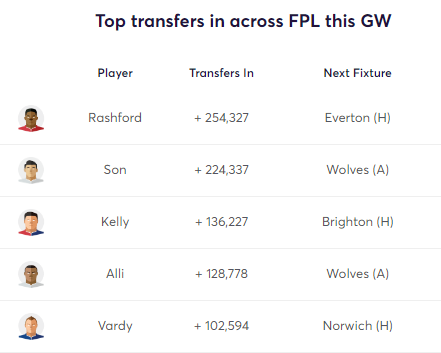 Heung-Min Son bagged his 3rd double-digit haul in 4 gameweeks following a goal and an assist against Burnley. His ownership has increased substantially during this run of form, with him being back to his best – one of the best FPL assets going. 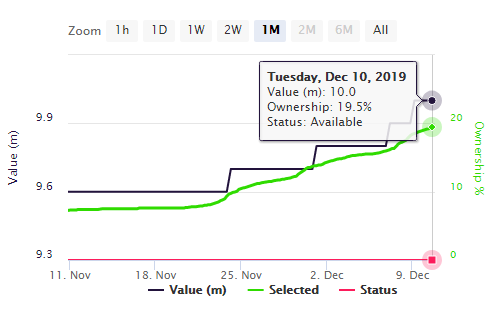 Also, no surprises to see Jamie Vardy included again – his own run of form has been outrageous. 16 goals for the season, goals scored in the past 8 consecutive gameweeks, and the top scorer in FPL by a decent distance. His ownership now sits at 50%.

In terms of the transfers out, City’s two main men in midfield – Sterling and De Bruyne – have been shipped out more often than any other players this week. Sterling has been particularly worrisome from an FPL perspective – he’s only contributed to 9 goals in 1311 minutes this season. For comparison, Riyad Mahrez has contributed to 10 goals in just 658 minutes of action.

One potential option going forward would be Aston Villa’s main man, Jack Grealish. He’s provided 4 goals and 4 assists this season, with him having returned in 3 of the past 4 gameweeks.

During those 4 matches, Grealish has managed 10 shots and 11 key passes/attempted assists – very promising underlying stats, backed up by end product.

There was an interesting post on FFScout which was also posted on Twitter, detailing Villa’s recent tactical changes and how they effect both Jack Grealish and Matt Targett – another decent Villa option.

Getting a few questions re Grealish and Targett, so here’s a couple of pieces I wrote for @FFScout.

Both from October, but nothing has changed – I like them.#FPL pic.twitter.com/0zEfmoH6Cp

Midfielders are being moved around rather frequently at the moment, with the likes of De Bruyne, Sterling, Pulisic and Mount all being shipped out this week – spotting a midfield differential could be massive over the winter fixtures.

Not a very glamorous pick, but one that comes in at a cheap price with fantastic recent returns and great fixtures – Palace’s keeper Vicente Guaita could be a fantastic option going forward.

Palace have kept 3 consecutive clean sheets, with Guaita grabbing both a save point and bonus points in all 3 of them, amassing a total of 28 points in that time.

The goalkeeper market in FPL is an odd one this season, with Guaita really emerging as a top option. Looking at transfers made so far this week, a lot of players are moving their cheaper options – Pope, Henderson, Gazzaniga, et al – out for Palace’s Spaniard between the stick. 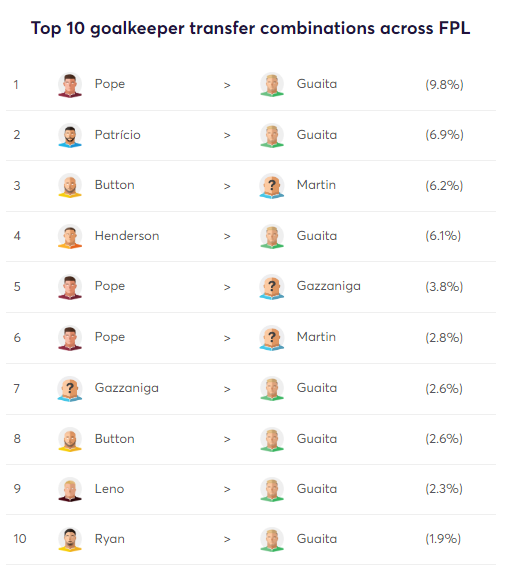 They have an excellent run of fixtures coming up, with their next three fixtures being against Brighton, Newcastle, and West Ham. While Newcastle’s form has picked up, Brighton and West Ham have scored 8 and 6 goals respectively in the past 6 matches, with West Ham having the second-lowest Expected Goals of any side in that time. They’re second to Palace, actually – that’ll probably end up being 5-4 or something.

I’ll level with you, things are a bit of a struggle this week – all of the top players in terms of form and stats have either been mentioned in a recent bandwagon post, or are, well, one of the best players in the league.

Let’s wrap things up with something proper rogue, shall we? Here’s Brighton’s Adam Webster – owned by 13,193 players.

Brighton play Palace, Sheffield United and Bournemouth in their next 4 gameweeks. As mentioned, Palace are really struggling for goals, while Bournemouth have been pretty wretched in general for a while.

An interesting item to note about Webster would be his recent attempts on goal – in the past 3 games, Webster has had 5 shots on goal, and an attempted assist to boot.

He’s joint-third for shots on target in the past 3 gameweeks, having had 4 in that time. He’s emerged as a massive set piece threat, and plays for a side that has some solid fixtures coming up from a defensive standpoint.

While I don’t expect half the game to own him soon enough, he could be a very solid punt at a near-cannon fodder price.