We explore the best options for the Fantasy Premier League captain for Blank Gameweek 28 and reveal the results of our captain poll and our new captain metric – who will you choose this Gameweek? 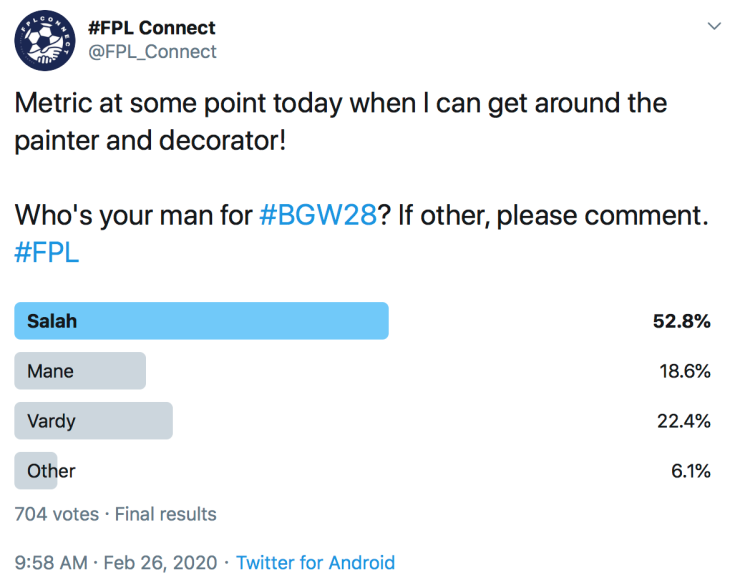 The winner of the metric is Mohamed Salah.

TheeGefloos from Sub-Reddit Fantasy PL, has contributed to the development of the new ‘rank order’ system where players are awarded points on the metric in an order from the best score, to the worst score at the bottom.

If player A and player B have the same points and both have the highest/best score for that particular stat, then they are awarded the highest amount of points (in this context, 4), but they then count for 2 ranks, as there is two players, which means that player C is awarded the 3rd rank and is thus awarded 2 points, rather than 3.

(Explosivity %), as the name suggests, gives us the percentage of games the player has ‘exploded in’, or in more accurate terms, has provided a double-figure return. In the same way as before, it can give us an idea of how likely a player is to return a double-figure haul and a clear view of how good he’s been at providing double-figure hauls in the past.

Breakdown of the metric:

As you can see from the absence of it above, I haven’t included the usual ‘differential captain’ section that usually appears on this article.

I haven’t excluded it because I couldn’t be arsed this time, no, I’ve done it because, given the fixtures that are available, I simply cannot find a reasonable differential captain to suggest that isn’t in the metric.

Liverpool assets will be heavily backed this GW given Man City and Arsenal are blanking and the only options outside of them are Vardy and Ings based on fixtures, but neither of these are in the greatest of form – anything else would be a real gamble, and a silly one in my honest opinion.

I still think they’re reasonable calls IF you do want to go against Liverpool, but I really don’t think this GW is the week for it.

I do think however, there’s real value in going with perhaps Mané or Trent Alexander-Arnold against Mo Salah if you’re looking to climb rank, as both these assets won’t be as well backed as Salah, but should still do well, as we saw last GW with both TAA and Mane outscoring Salah.

Nigel Pearson has got Watford going again. They look stronger in every department and I can’t see Pool smashing them, so a TAA captaincy could well be a good call, as I expect a 2-0 kind of scoreline.