We explore the best options for the Fantasy Premier League captain for Double Gameweek 29 and reveal the results of our captain poll – who will you choose this Gameweek?

ADDITIONALLY: Because it’s a double gameweek, there is NO metric this time as it’s very difficult to statistically compare players who have 2 fixtures versus players with one. The metric isn’t designed for double gameweeks with it’s set up so parts of it wouldn’t make any statistical sense.

Pierre-Emerick Aubameyang – 42.9% of the votes

Aubameyang – As you can see from the stats above, Auba has 4 goals in his last 5 games, which is a great return for the Gabonese International. As an FPL asset, he’s a solid choice with typically regular returns, whether he’s out wide on the left cutting in, or on his own up front.

He’s currently stationed out wide by Arteta, which hasn’t prevented his output however, it does mean he’s not in the box as much. The threat comes from his runs inside the full back which currently, is working well.

With West Ham at the Emirates, the first part of their double, who have conceded 15 goals and 15 big chances in their last 6 games, it’s a great chance to hit a big score, but what I would say, is that he really has to score well here, as I can’t see much for him at the Etihad.

It’s true that City aren’t as solid defensively this year when compared to last, but when you compare them to the other teams this year, they still rank very highly. They have conceded the fewest (16) big chances of any team at home and rank the joint 2nd strongest defence for conceding goals.

So if he does blank against West Ham, then you’re likely looking at a blank, with a 1 goal return the most you could hope for against City, bar an anomaly where City start playing very poorly, giving the ball away etc.

The good news is, he is as “nailed on” as you could hope for in captain for a double gameweek and the odds of him scoring well against the Hammers are pretty good with an outside shot at returns against City.

Kevin De Bruyne – Mr Assist King can really do no wrong. This guy has been exceptional this year and even with two tough fixtures in United and Arsenal for this DGW, I wouldn’t be put off him in the slightest.

If you combined his score in the two reverse fixtures, you’d be looking at a huge 20 pointer. He blanked against United and got booked but against Arsenal, he scored 2 and assisted one in a masterclass by the Belgian.

I do think if there is anyone out there right now that is well equipped to stop City doing what they do, it has to be the former understudy of Guardiola himself, Arteta. Of course, Arteta doesn’t have the personnel that Pep does, but he has such insight and he’s got Arsenal to raise their game for the bigger games (as we saw against United and Chelsea at Stamford Bridge) and I can see it being a tough game for the citizens.

And of course, the Derby has been difficult for City this year, with United getting the better of them twice at Etihad this year. They did however, beat United quite comfortably at OT 3-1 in the 1st leg of the Carabao Cup semi-final which bodes well, but I can’t see this one being as easy after that.

Out of all the City assets, he has to be the most nailed on and given how reliable and explosive he has been this year, he represents a very strong captain. 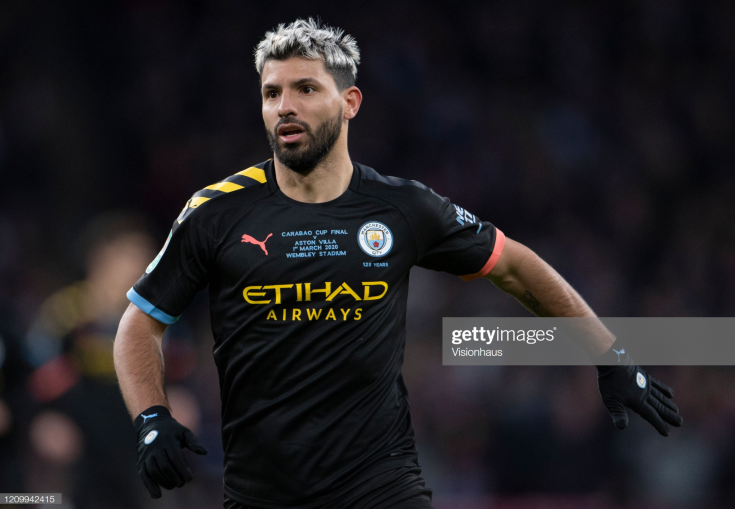 Agüero – The Argentine did pick up an injury in the final of the Carabao Cup but Pep has confirmed he’s available for tonight’s game in the FA Cup. If he doesn’t start that one, I’d be quite confident he starts this weekend and my guess would be it goes that way just to give him a chance to recover fully from his knock on the weekend.

Now this one is difficult, because Gabriel Jesus is playing really well and Pep is using him quite a bit. There’s every chance that Pep could use Gabriel Jesus from the off in either of these two games which for me, makes him a high risk high reward pick.

There’s no question that if he played both, he’d be the one to choose but we just don’t know that, so it makes it tough to go with him.

Mohamed Salah/Sadio Mané – Now yes, it’s a double gameweek, but I think it’s very reasonable to consider captaining one of these two players.

Bournemouth are struggling this year and Liverpool are a team they simply can’t seem to handle. The last 5 games between the two sides have resulted in either 3-0 or 4-0 scorelines all to Liverpool. In particular, Mo Salah has a great record against them with 7 goals and 1 assist against them in that time.

It’s completely conceivable in my eyes that Liverpool hit Bournemouth for a 3/4/5-0 scoreline with these assets getting a couple of attacking returns. Liverpool will wanna bounce back strong after their recent slump in form and I can’t see them not doing that against the Cherries this weekend.

With the above in mind, I think it’s gotta be either KDB or Aubameyang.

I personally slightly favour KDB, as City can really play anyone off the park on their day and KDB is involved in everything. The slight issue for him is getting into the box. He was getting into the box more the first half of the season but seems to have backed off a little bit however, we know he can score those long rangers so the threat of goal is still there.

Aubameyang looks a great option however, as I stated above, if he doesn’t return in that West Ham game, then it’s gonna be slim pickings at the Etihad. The game against West Ham though, is very tempting given their defensive frailties and he really should be taking advantage and returning well in that game.

I do have a strong feeling that Salah is going to score a double-figure return against Bournemouth, so whilst it’s not as fun to captain a single GW player in a DGW, I think it could end up being very fruitful.

I personally wouldn’t be captaining the likes of Mahrez, Sterling, Pepe this GW. There’s too much uncertainty in the way of rotation/form/reliability to give them the armband.

Don’t forget that, a lot of players won’t realise it’s a double gameweke, so there should be a decent variation of captaincies with Vardy at home to Villa and Liverpool playing Bournemouth at Anfield.

Best of luck to you all for the double gameweek!