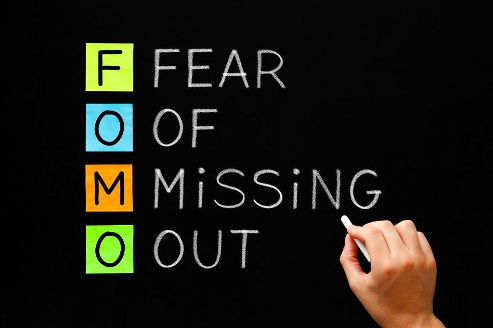 For those of you that actively take part in the FPL Community on social media, I am sure that you will have seen the acronym FoMO splashed around as an explanation for adhering to peer pressure, performing ‘knee-jerk transfers‘, and generally poor decisions made on a mass-level. However, you may have wondered:

This article is expected to be a 10 minute read, perfect for your journey to work, your lunch break, or an FPL bed-time story. I hope you enjoy!

Fear of Missing Out, abbreviated to FoMO, is a Psychological term for the “pervasive apprehension that others might have rewarding experiences from which one is absent” (Przybylski, Murayama, DeHaan & Gladwell, 2013, p. 1843).

The authors continue to explain that FoMO is characterised by the “desire to stay continually connected with what others are doing” (p. 1843). In other words, we obsess and worry about the possibility that others may be enjoying themselves and succeeding to a greater extent than we are, and as a result we feel as though we must stay up-to-date with their every move incase they manage to do something we had not considered.

Does this sounds like a description of you in relation to FPL on social media? It certainly does for me, I think I regularly experience ‘FoMO’!

The Impact of Social Media on FoMO

For those with a tendency to experience FoMO, social media can be a dangerous catalyst. A study by JWTIntelligence (2012) found that nearly 70% of adults admit to experiencing feelings of ‘missing out’ (as cited in, Abel, Buff, & Burr, 2016).

The advancement of social media has made receiving information relating to FPL more accessible than ever before, and as such, the fear of missing out and the desire to stay connected to everyone’s moves has become that of an addiction – “what happens if @FPL_Connect has made a transfer/captaincy decision that I have not considered, and as a result everyone else will be successful and happy whilst I might not?”

Now we know what it is, we will briefly explore the Psychology underpinning FoMO.

At a basic level, FoMO can be explained through the ‘Self-Determination Theory‘ (SDT; Deci & Ryan, 1985). This theory posits that effective self-regulation and psychological health are met through the satisfaction of three basic psychological needs: competence (the ability to effectively and successfully act/behave in the world); autonomy (the ability to act independently and by choice); and relatedness (to be close and connected to others) (Przybylski et al., 2013).

Therefore, for humans to be satisfied, we must feel we have the ability to control our behaviours, feel as though we have free-will and choice, and feel connected to other people. Specifically, the desire to be competent and the desire to be related are potentially what drives FoMO in FPL. We want to feel (and appear) competent in our decision-making, and we also want to constantly stay connected to other FPL accounts.

As a result, our desire to be competent and successful will naturally be heavily influenced by the accounts we are connected to.

To explain this as a thought process: “I want to be the best FPL player on Twitter, and succeed this season” –> “I am seeing other FPL managers make XYZ decisions, what if those are successful and as a result I drop in rank and look incompetent”? –> “I must make the same decisions as them in order to avoid missing out” – this right here, is FoMO as its finest.

Lastly on the Psychology, how does FoMO affect our functioning and decision-making?

Turkle (2011) explains that FoMO can degrade our well-being and cause us to have a ‘tethered sense of self‘, as we are constantly second-guessing our decisions.

Wortham (2011) supports this claim, emphasising that FoMO could be a primary source of negative mood because it undermines our feelings of contentment with our decisions. In other words, constantly staying connected to other people’s decisions makes us question our own decisions and behaviours, leading to a fragmented sense of self.

At the very worst, this could cause an identity crisis. Therefore, we MUST try and self-regulate our FoMO, and acknowledge that our decisions are worthwhile and ultimately the most important ones we should consider.

Applying Our Knowledge of FoMO to FPL

Now that we understand some of the basic Psychology behind FoMO, and what it could potentially mean for our sense of happiness and well-being, what does this mean in relation to FPL? What should you do? Or, more accurately, what shouldn’t you do?

I believe that manoeuvring FPL is all about the attitude you take to decision-making and most importantly, to incorrect decisions. The list I am about to give of things to avoid are only relevant if you believe that you are prone to negative mood when experiencing FoMO, and if you feel anxiety if you are missing out on a player/captaincy/transfer.

With a positive mindset, FoMO as a moderate state of mind can be absolutely fine. It is also important to note that FoMO does not necessarily lead to the incorrect decision (indeed, if you transferred in Pukki after GW1 at the start of the season due to FoMO, that would have been a fantastic move for the first 5 GWs).

What FoMO does, is influence how we wage our options, and as such can heavily bias our decisions. However, as a general rule of thumb, here are some examples of things to avoid associated with FoMO:

Applying Our Knowledge of FoMO to GW33+

Lastly, we will explore FoMO specifically in relation to the preparation for GW33+, for those of you have not already completed early transfers!

Firstly, we will discuss the Nick Pope conundrum. For those of you who do not own Nick Pope, my suggestion would be to accept your decision and focus on other areas of your team.

The term ‘set-and-forget’ keeper has been around for some time now, and it is because generally speaking a large majority of GKs will go through various patches of form where they keep consecutive clean sheets, and then fail to keep any. Wasting transfers on GKs, especially when it is chasing points and due to FoMO, is in my opinion an absolute must avoid.

Whilst there is a chance that Pope will keep a clean sheet against Sheffield United, it is best to utilise Free Transfers and use hits elsewhere.

The second piece of advice for GW33+ is to not rush into the Rashford to Greenwood transfer that appears to be rife on Twitter!

I am not suggesting that this is not a clever move to free up cash, however, there are multiple risks associated with this move that should be carefully considered before jumping on the bandwagon.

Rashford has only recently recovered from a long-term injury, and despite his mini goal-drought, he appears to be finding his feet again. Furthermore, Manchester United could potentially play another 14 games before the end of the season if they reach the Finals of the Europa League and FA Cup.

You would have to imagine that Rashford will still start all (or most) of the Premier League games, however, the same cannot be said for Greenwood, who could be utilised in the other two competitions.

Unless it is a decision made from your own instincts and research, or because you desperately need the cash freed up to spread to other parts of your team, I would recommend carefully considering following the herd and making this move.

That being said, Greenwood looks to be a fine prospect and was exceptional against Brighton, and at £4.4m (£4.7m less than Rashford), he could be an absolute steal, and I could be eating my words during the Bournemouth game, but it is not a given that he’s now a guaranteed starter like Rashford is.

In conclusion, FoMO is a common and perfectly acceptable feeling as part of an ever-growing FPL Community, as long as it is moderate and controllable.

We must do our best to control this fear, and make sure it does not develop into regular and strong feelings of anxiety, irritability and frustration. If your FoMO becomes severe and prolonged, and the fun associated with FPL turns into chest-tightening anxiety, I would urge you to take a break from social media and FPL, and talk to a professional about your feelings.

With regard to making sure it does not heavily affect our decision making, we must continue to value our own opinion as the most important. Stay connected to accounts on social media as they will provide excellent insight, statistics and advice. However, do not worry obsessively about missing out on a trend or mass-level decision – it is just as likely to go wrong as it is to go right!

Mostly importantly, enjoy FPL, enjoy the interactions on Twitter and other social media platforms, and take a positive attitude forward for the rest of the season.

This was written and produced by @FPL__Raptor – click the link to follow him on Twitter, to get more Psychological musings in relation to FPL, to keep up to date with his own progress, or to just be friendly and say hello.

Turkle, S. (2011). Alone together: why we expect more from technology and less from each other. New York: Basic Books.