We explore the best options for the Fantasy Premier League captain for Gameweek 33+ and reveal the results of our captain poll – who will you choose this Gameweek?

ADDITIONALLY: Because we have only 3 GWs of relevant data and the metric is based purely on 5 previous GWs worth of relevant data, I’m not going to do the metric as it would mix up the GW data from pre-lockdown with post-lockdown.

Similarly, the underlying stats would also get mixed up with previous pre-lockdown data which would invalidate the post-lockdown data, so I will just display this past GW data for what it’s worth. 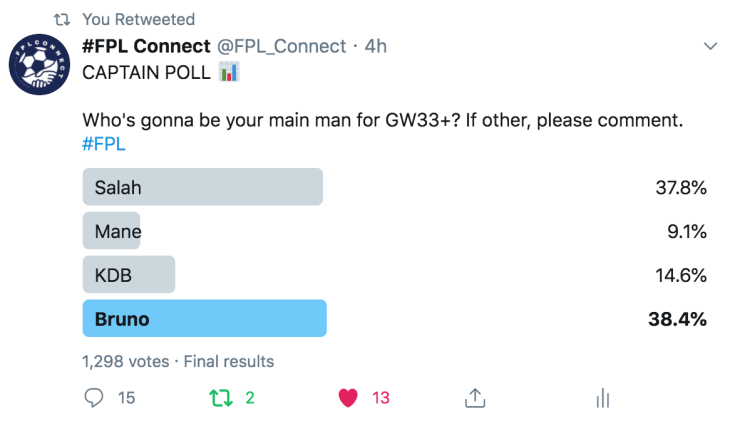 All underlying stats are taken from the first 3 GWs. Note that KDB/Mahrez have played an extra game over the other candidates and Salah has played 1 game less.

First up, and certainly on paper, the one that looks the most straight forward, is Mo Salah.

Up against the joint worst Premier League defence in Aston Villa, who have conceded 60 goals, it does look a no-brainer. In addition to their 60 goals conceded, they concede an average of just over 3 big chances every game with 139 of overall chances being conceded from Mo Salah’s flank, which is more than any other defence have let in from that side.

If we look into how Salah performs at home, the case is also significantly strengthened; out of the 15 home games Salah has played in, he’s only blanked on 3 occasions against Leicester, Wolves and Brighton. He’s produced 6 double-figure hauls, with 4 of them coming against teams in the bottom half of the table.

The last thing to consider is how he’s performed since the restart.

On the eye, he looks sharp and hungry and was unlucky not to have scored against City last night with his effort hitting the post and coming out. Above, you can see the statistics in his 2 games since the break; he’s getting into the area and getting plenty of shots away, and with him also on pens with Milner being out of the starting XI currently, it’s about as strong a case as you can make for any candidate this week.

I won’t go into Villa, as I have already stated their glaring defensive frailties above in Salah’s section.

In terms of Sadio, he’s been brilliant for Liverpool this season again, with him already just 1 goal involvement behind his total goal involvements (25) last season in far less game time.

This season, he seems to have upped his creative game however. Last season he scored 22 goals but only managed 3 assists, this season, he’s upped his assist game, getting 9 but has less goals, with 15, which, from a pure FPL point of view, does mean less points with assists getting 2pts less than a goal for a midfielder.

However, he’s the 3rd highest scoring FPL asset in the game right now and having returned 4 double-figure hauls against teams in the bottom half of the table, he looks to be another good shout for the armband.

The slight concern with Sadio is his form from the restart. On the eye, he doesn’t appear to be as hungry as he was before, certainly far less than Salah and looks to be off the pace somewhat with only 3 goal attempts registered in the 3 games so far since the PL returned.

The Portuguese star has taken the Premier League by storm, taking Manchester United’s form by the scruff of the neck and almost single-handedly turning things around, with 5 goals and 3 assists in his first 8 appearances since joining from Sporting CP.

His influence cannot be understated. He’s infectious with how pro-active he is on the field, chasing everything down and giving 100% every minute he’s on the field and it has spread throughout the ranks and as a result, United are playing together, as a team, and it’s shown in their performances and results.

Bournemouth have looked dreadful most of this calendar year and have looked even worse since the restart. Only Norwich (8) have conceded more goals than Bournemouth (7) since the return of the PL and conversely, Man United look so fluid and dangerous in attack.

With Bruno on literally everything set-pieces wise, and given how important he is to this team right now, he makes a very strong case against Salah for the armband.

The Belgian magician is someone you simply cannot leave out of the captaincy conversation each GW.

The top scoring FPL asset is now 16pts ahead of Mo Salah with 11 goals and 20 assists so far this season after netting 14pts in last night’s emphatic 4-0 win over newly crowned Champions Liverpool. With penalties now added to his arsenal, he’s the perfect FPL asset.

Having said that, a team that has returned to PL life well, is Southampton. They’ve beaten Norwich and Watford comfortably 3-0 and 3-1 respectively since the restart, but did lose 2-0 at home to Arsenal. Only Wolves (13) and Man United (11) have conceded less shots inside the box than Southampton (14) since the restart however, so it won’t be an easy game for City.

City are looking extremely good right now though, with 13 goals scored from 13 big chances created in just 4 games since returning to the PL, and De Bruyne has played a massive role in that so you’d like to think Southampton won’t be a problem for Kev and the Citizens.

As stated above in the Bruno section, Bournemouth look dead in the water and are mentally fragile. United could wreak havoc and these two both have decent ‘haul’ potential as well as Bruno.

The appeal of Rashford has taken a dent however, since the introduction of Bruno Fernandes, with him taking penalty duties away from Rashford, who had scored 5 of them this season of his 14 goals for United.

The slightly more worrying thing about Rashford for me, is that he has been out for a very long time, having suffered a pretty bad injury back in GW22, which was 11th January – that’s a total of 157 days without kicking a ball – and since the restart, in my opinion, it has shown. His touches and passing looks off and just generally, he doesn’t look 100% yet.

Of course, with more game time this will come and I doubt he’ll need to be at 100% to return well against this current Bournemouth side, but it is a slightly worry and an argument against him when considering the armband.

Martial looks to be sharp with regards to his play and is very composed in front of goal. Against teams in the bottom half at home, Martial has been quite consistent this season:

Additionally, he of course smashed in that brilliant hat-trick against Sheffield United at Old Trafford, so in terms of form since the restart, that’s a tick.

The one thing I haven’t mentioned in the above analysis is game time and rotation.

The reason I haven’t done that is because we’re all in the dark on it. It’s a guessing game and we’re all going to see it differently so there’s no point including that in analysis.

I think it’s wise to simply ignore “he may get rested/benched” arguments as there’s literally no weight in them at all, unless you personally know someone who actually has legitimate inside knowledge.

They’re only going to cloud your judgement and make the decision ten times harder so in my opinion, it’s best to weigh up the factual pros and cons, stats and eye test and base your decision solely on that.

For me, it has to be between Bruno, Salah and KDB. They are the stand out assets at the moment with the best form/fixtures and potential.

I would favour Salah and Bruno more so than KDB simply because I think Southampton have actually performed well since the break, and I don’t expect that to be easy, despite how good City have been. They have beaten a Liverpool side who’s defence looked like they’d been out on the town the night before, a second string Burnley side and a pretty poor Arsenal defence.

Klopp was furious after the City game and will want a reaction and I believe, unlike Mané, Salah has the hunger and motivation to play to get that golden boot and I think we’ve seen that in his performances.

Bruno and United need that top 4 qualification so their desire is there and with them up against a very unstable Bournemouth side, it really could be goals galore however, I do slightly favour Salah over Bruno, simply because with United right now, there’s Tony, Rashford, Bruno, Pogba and likely Greenwood who can all share in the goals whereas at Liverpool, I really feel the goals will be less shared, with Salah getting the majority.