So the final day of this bizarre and unprecedented season is upon us.

Sunday marks the day Overall Rank and Mini-League hopes are either made or crushed.

A fair number of you have held back your Free Hit chip for this final day, in the hopes that you can make up lost ground or to push you further away from your rivals who are chasing you.

A wise strategy, given that the final day typically produces a higher average of goals scored, meaning more points on offer for us FPL fanatics – here’s how the final day looks… 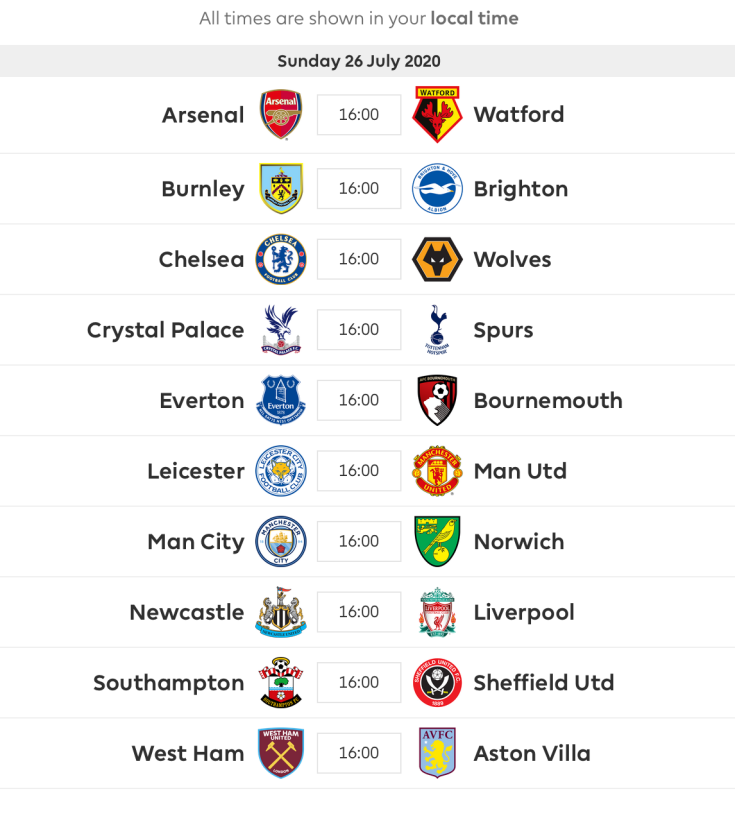 The one fixture that leaps off the page, of course, is Man City at home to Norwich. This really could be any score given how poor Norwich have been this season, so picking 3 from City and getting them right will be absolutely essential to final day hopes succeeding. 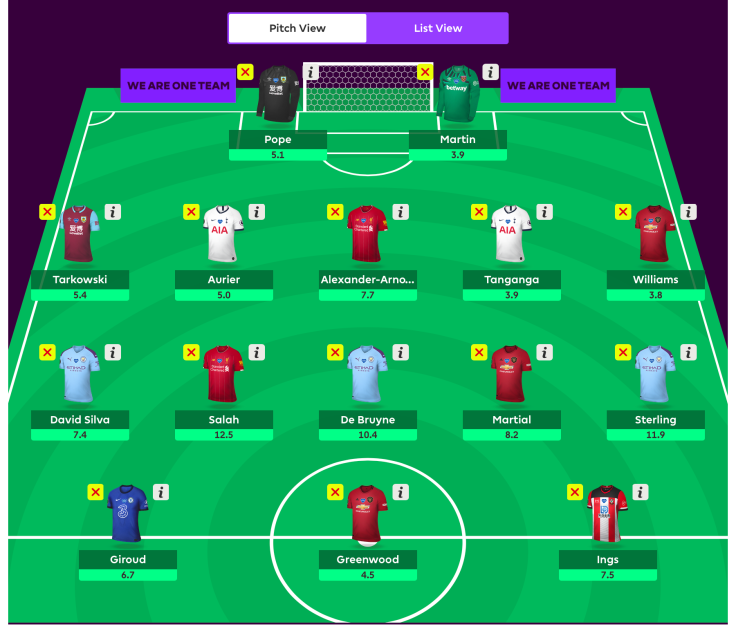 I think the obvious choice for the final day is golden glove chaser Nick Pope. Since restart, only Palace (4) and Norwich (1) have scored fewer goals than Brighton (5), whilst only Man City (6) and Wolves (5) have kept more clean sheets than Burnley (4).

If you don’t already have Pope and need a little extra money, I would opt for Emi Martinez. Watford are very much struggling and it appears the pressure may have got to them. Arsenal weren’t great v Villa but will make it very difficult for Watford on Sunday.

Despite Liverpool looking woeful defensively since they mathematically confirmed their title win, and just 9pts over 4 games, Trent Alexander-Arnold last night, displayed why it’s dangerous to lose him.

A goal and an assist against Chelsea and subsequent 13pt haul demonstrated once again why he’s such a valuable asset.

Elsewhere, James Tarkowski and a double up on Burnley defence seems logical. The Burnley players have spoken out about wanting to help Pope win the golden glove, and a home fixture v Brighton seems highly probable that he will, so double-downing on their defence at least, seems a good bet. I’ve opted with Tarkowski for his goal threat from set-pieces.

Erik Pieters at £4.3m could be a great and cheaper route into their backline if you need the cash. He has 4 assists to his name this season so holds a credible attacking threat too.

If you don’t trust tripling on their defence, then Serge Aurier could be a really good bet. Spurs play Palace last day, and as evidenced above, only Norwich have scored fewer than Palace since the restart and Aurier has picked up 4 clean sheets and an assist since the PL returned.

With Luke Shaw out, Brandon Williams represents good starting bench fodder at just £3.8m with the young full back currently replacing him in United’s starting line-up.

I think one guy that absolutely HAS to be in your Free Hit squad above all others, is Raheem Sterling.

The young English forward picked up another monster haul versus Watford taking his goals tally to 19 for the season, level with Salah. He was even allowed to take the penalty by KDB.

4 goals seems too far for Sterling final day, and if he played for any other team and was up against any other team, then I would agree, but because he plays for City and is playing against Norwich, I don’t think 4/5 goals for Raheem in this game is impossible.

We’ve seen Agüero hit 4/5 goals in a game for City on a couple of occasions and whilst it doesn’t happen often, I wouldn’t bet against it happening on the final day!

Kevin De Bruyne is the other must-have. It’s just simply too difficult to imagine that City don’t score at least 4/5 goals in this game and if they do, and Kevin is starting, then he will be among the points, as he bids to beat Thierry Henry’s assist record.

David Silva, El Mago, makes up the final City slot for me, simply based on it being his last Premier League game for Man City. He, and I’m sure his teammates, will want him among the goals/assists, so I can see him getting into the box a lot and any free kicks around the edge of the area, him taking.

Anthony Martial continues to deliver the points for his owners and despite a fairly difficult final day fixture for United, the OOP midfielder up front for the reds, gets my vote. United have looked jaded and off the pace in recent matches which is a slight cause for concern, but despite that, Tony has continued his personal form, notching a nice assist last night for Greenwood’s goal.

If United are to score a couple, I expect, given his current form, Martial to be the one producing the return/returns.

The last spot is somewhat contentious in Mohamed Salah. On paper, the selection is a no-brainer. Newcastle have conceded 18 big chances and 14 goals since the restart and Mohamed Salah has had a whopping 26 shots inside the penalty area, including 9 big chances – only Antonio has had more (11).

The problem is, that he seems to be missing a lot of them. This may be enough to send you looking elsewhere but like Sterling, Salah is the kind of player that can hit huge hauls, and on the final day, that’s the kind of player you want. One that is still highly driven and motivated to score, playing in a very good side against an opponent that is conceding plenty of chances – all ticks in my box.

Portuguese and new United star Bruno Fernandes does not feature. This is based on the few performances recently from him and United, where they and he, have looked very jaded. Bruno has been giving the ball away a lot in recent matches and hasn’t looked his best and given he hasn’t had and won’t get any rest before the Leicester game, I’m skeptical of his performance on the final day.

Now, because I’ve gone for the big hitters in midfield, this doesn’t leave space for a big attacker.

If you aren’t keen on Salah, then dropping him down and going with Aubameyang or Harry Kane is a credible option for the final day.

With Watford now having to get a win at Arsenal to give themselves a chance of being saved, that should play into the hands of Arsenal, and Aubameyang especially, the kind of striker that thrives in open spaces. As they demonstrated against Villa however, they’re not the most reliable attacking unit, but in fairness to Villa, they did perform very well defensively.

On paper, Harry Kane looks the most enticing differential option. He’s posting great underlying stats, is in decent form and plays against a Palace side that have very much looked on the beach since restart. In that time, only Norwich (18) have conceded more goals, and only Watford and Sheffield United (22) have conceded more big chances than Palace (17, 21 respectively).

My issue with Kane, is the manager and his style of play. The goals he got against Leicester were a result of counter attacks, something he will be very unlikely to get against Palace.

I do still expect him to get chances and he’s looking sharp in front of goal so it wouldn’t surprise me to see him do well, as he typically tends to perform very well at the end of the season, but the more negative and conservative style of play Spurs employ under Mourinho puts me off and they’ll be facing a side that will limit the space in behind and they’ll sit deep – something Spurs struggle with, without a chief creative midfielder.

Gabriel Jesus instead of David Silva for a third City slot is another viable option in my opinion. Whilst he blanked against Watford, it just looked like one of those days for the Brazilian and he was only an inch offside for his goal right at the end. He’s a player that is capable of hauling and with them playing Norwich, he could easily hit double-figures if he starts and he’d be a nice differential to have at only 8% at the time of writing.

Danny Ings however, is the one I’m banking my money on. Ings has had a terrific campaign, scoring 21 goals, and had it not been for him missing the penalty last week, he would be on 22, but with him the closest of the players behind Vardy, he likely represents the only real credible threat to Vardy’s chances of the golden boot.

He’s up against Sheffield United. They don’t have anything to play for aside from not losing their league position and as stated above, they, along with Watford, have conceded the most amount of big chances (22) since the restart (bare in mind they have played 1 extra game over the others).

Young United starlet Mason Greenwood makes up the final spot in my starting XI. He is in there because of his price and the fact that he continues to start for Ole and perform. If United are struggling for a goal, he’s probably the most likely to get it, as he can make something out of nothing and can score from any position on either foot. An incredible talent that shouldn’t be overlooked for your starting XI’s.

Olivier Giroud is on the bench. With it being the final day, subject to early team news, there may be a good chance we see a few random rests/benchings, so I wanted to include a strong but not too strong bench option. Giroud is a one goal merchant and is performing very well for Chelsea right now.

5-7pts on the bench isn’t too hard to swallow but would be useful should his services need to be called upon.