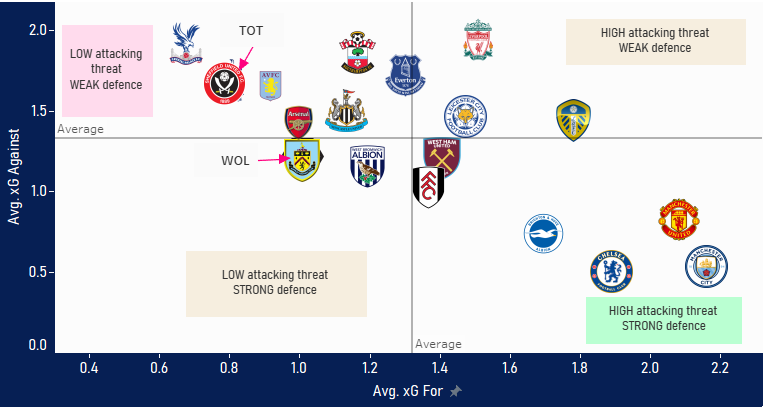 We explore the best options for the Fantasy Premier League captain for Gameweek 26 and reveal the results of our captain poll and our new captain metric – who will you choose this FPL Gameweek?

Results of the Poll

The following underlying statistics are taken from FantasyFootballHub.co.uk. If you want to gain access to these stats yourself, register to become a member here >> https://fantasyfootballhub.co.uk/freetrial/.

The winner of this weeks Captain Metric will be revealed later in the article.

The format of the captaincy metric article will be slightly different this week, with the winner revealed following a detailed analysis of individual and team based factors to consider in your captaincy decision.

As you may be aware, we have a very substantial number of fixtures in gameweek 26 with many highly owned FPL players featuring twice. This makes the captaincy choice even more critical in what could be a very high scoring round.

Selected fixtures for the double gameweek (days rest between fixtures in brackets):

Who are the top performers?

One of the main questions you must ask when choosing your captain is ‘are they performing well?‘.

We have summarised the data from the past five gameweeks for selected players ahead of the double gameweek in the table below.

Two players who stand out based on recent form are the Man City pair Ilkay Gundogan and Raheem Sterling. Sterling has, on the whole, been a threat in the opposition penalty box; touching the ball in the area a huge 43 times. Only Salah (30) comes close from the rival captaincy options.

Both Gundogan and Sterling have also seen many big chances fall their way with five apiece, highlighting their strong goal threat in a very attacking Man City side of late. Gundogan himself has the highest xG90 (expected goals per 90 minutes) with 0.71, closely followed by Vardy (0.67), Salah (0.64) and Sterling (0.62).

Despite Liverpool’s struggles, it is certainly worth mentioning Salah in the captaincy debate following some very strong individual performances. On top of the 30 penalty box touches and 0.64 xG90 in recent weeks, he has also taken 17 shots and scored four times. Only Bruno and Gundogan match him for goals scored in this time; the metric that really carries the most weight. Salah’s lack of creative numbers also suggest he is being quite selfish as an attacker; a very desirable trait in an FPL captain!

Glancing at the table, it may appear that Bruno Fernandes has the best individual numbers across the board. Without doubt he is the most prolific creator of chances in recent weeks, however this relies on his teammates to put the ball in the net for him to benefit. That said, he has still taken a large number of shots (17) and scored four times in the past five gameweeks; joint first for both metrics.

The Spurs duo of Harry Kane and Heung-Min Son have recorded very poor underlying numbers of late when compared to their usual high standards. Son in particular has looked a shadow of the player who was terrorising defences and had a telepathic relationship with Kane earlier in the season. Just the one big chance and 0.15 xG90 for Son suggests he is struggling for form.

Kane can be looked at slightly differently given his reduced minutes recently. If his number of shots were adjusted to factor in playing time missed, he would be top of the pile with 21.7, almost five more than Salah and Bruno. Applying the same calculation to penalty box touches gives him 28.3, only a couple behind Salah. The signs are certainly there that Kane could be ready to start scoring again ahead of double gameweek 26.

Which fixtures should be targeted?

There are some interesting fixture doubles to consider when making your captaincy choice, rather than just relying on the individual data above. All data in this section relates to team performances over the past five gameweeks.

Man City top the table as an attacking force, averaging 2.16 xG90 (1st) and have created 17 big chances (1st). Only Man United have scored more goals than the league leaders.

Their opponents in the double gameweek, West Ham and Wolves, have put up very similar numbers in defence. Both sides have been relatively tight recently, conceding just 1.20 & 1.21 xG90 (12th & 13th) respectively. Wolves have conceded just three goals; only Man City and Chelsea have conceded fewer (both two).

While a dominant attacking force, City will likely come up against two tough and organised defences in the double gameweek. There are also just two days of rest between these fixtures, so expect rotation!

Man United are also a very potent attacking threat, averaging 2.08 xG90 (2nd) and have created 15 big chances (3rd). No team have scored more than Man United in the past five gameweeks (14).

They face mixed difficulty in opponents; Chelsea (strong defensively) and Crystal Palace (weak defensively). Under Tuchel, Chelsea have become a very solid defensive unit, only conceding 0.50 xG90 (1st). The have also conceded the joint fewest goals in the league with City (2).

Palace, on the other hand, have been conceding 1.91 xG90 (2nd) and have leaked 12 big chances (5th). While Palace concede plenty of chances, they have only actually conceded seven goals; although they are certainly the more favourable fixture of the two. Again, just two days rest for Man United between fixtures.

Liverpool also face a mixed double gameweek in terms of difficulty, playing Sheffield United before hosting Chelsea at Anfield; remarkably a venue they have yet to win at this year.

We already know that Chelsea will be a tough team to break down, but is there enough in the Sheff United fixture to tempt a Salah captaincy? Well, they have conceded 1.67 xG90 (6th), so are certainly one of the weaker defences at the moment. Teams have also carved out 13 big chances (4th) against them, highlighting a clear weakness in their defensive structure.

Liverpool have the advantage of three days rest between fixtures, with their ‘easier’ game against Sheff United coming first. They need to bounce back, and quick.

Spurs‘ form is a bit of a concern if you are considering a Kane or Son captaincy. They rank 18th for xG90 (0.81) which highlights a real lack of attacking threat from Spurs recently. Also, they have only scored three goals (20th) in the past five gameweeks; two of which were against West Brom.

On paper, their opponents (Burnley & Fulham) look great; the FPL app even mark both as ‘green’ on the FDR. In reality, both are in the bottom third for xG90 conceded with neither team conceding more than six goals. Not exactly the quality of defences you want to come up against when struggling to create chances!

Like Liverpool, Spurs will also have three days rest between fixtures. Barring an injury concerns, this almost guarantees both Kane and Son will feature heavily throughout the double gameweek. This is certainly a factor that should be considered.

Who wins the Captaincy Metric?

The winner of the captaincy metric for double gameweek 26 is Bruno Fernandes.

You can see the results for all candidates in the table below, broken down by their individual and team contributions towards the metric score. For a more detailed understanding of how the metric is calculated, please click here.

It is also important to note that because all selected players have two fixtures this week, their team score reflects both fixtures and therefore carries the weight of the metric score. In a single gameweek, individual vs team contributions are typically more balanced.

We have already outlined the key individual and team considerations for the gameweek ahead, but here is a recap of some of the important considerations:

In my opinion, there is no clear choice for captaincy this week. This should make it a much more exciting gameweek, with huge rank gains to be made if you choose correctly!

The top three scoring players on the metric may all look like the obvious choices, but how much involvement are they likely to have given the minimal rest in between? Bear in mind that both Man City and Man United are involved in European football this week, so it is worth monitoring how Bruno, Sterling and Gundogan are managed in these games. I will also include De Bruyne in the argument, who unfortunately missed out on the metric due to a lack of playing time.

Salah, Kane and Son will all benefit from an extra day of rest in between fixtures, and both Liverpool and Spurs will need their key players firing to turn around their poor form of late. The fixtures look better for Spurs, however Liverpool may do more damage in one game against Sheffield United than Spurs could against either Burnley or Fulham.

The fixtures also look great for Everton and Calvert-Lewin, but Everton have been highly unpredictable this season and are only posting average attacking numbers in recent games. DCL could well be worth a punt given Everton don’t have any European commitments, but just be wary of the limited rest between fixtures in gameweek 26 (two days).

I must also mention that this is a purely statistical take on the captaincy debate this week. What’s clear from the metric is both Kane and Son look like inferior options compared to the rest, but don’t take the metric at face value. There have been many occasions this season where players have defied the stats and performed; perhaps now is the time for Kane, Son or Salah to fire!