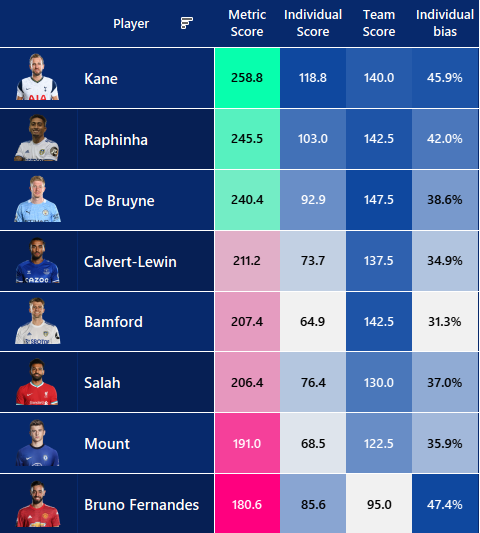 We explore the best options for the Fantasy Premier League captain for Gameweek 30 and reveal the results of our captain poll and our new captain metric – who will you choose this FPL Gameweek?

THIS ARTICLE WAS WRITTEN BY FPL RAPTOR.

The following underlying statistics are taken from FantasyFootballHub.co.uk. If you want to gain access to these stats yourself, register to become a member here >> https://fantasyfootballhub.co.uk/freetrial/.

Who are the top performers?

We have summarised the data from the past five gameweeks for selected players ahead of gameweek 30 in the table below.

Please note the all data in the article is based on the past five gameweeks unless stated otherwise.

There are two players that stand out in the above graphic, one for goal threat, and one for creativity. As you will see throughout the remainder of the article, they are likely to the two standout options this week.

The most creative player in the premier league across the last 5 gameweeks is Raphinha. He sits top of the pile for key passes per 90 (3.5), big chances created per 90 (0.8), and xA per 90 (0.34). He is also second for touches in the box per 90 (5.8). In other words, Raphinha is creating chances every single game, and is very involved in Leeds’ play inside the box.

The only issue with Raphinha at the moment, is actually his teammates. With no assists in his last 6 appearances, Raphinha has accumulated an xA of over 3 since his last registered assist. This could either mean that the assists will soon be arriving, or that his teammates are simply too wasteful.

The other player that stands out in the underlying statistics above is Kevin de Bruyne. KDB ranks in the top 3 for 7 of the above 9 metrics, whilst failing to top the group for any of them. This suggests that there are multiple routes to potential points for KDB, and this is what makes him so captainable.

Patrick Bamford’s underlying numbers do not paint a particularly promising picture. Despite his 11 pointer in GW29, he is shooting less per 90 (2.5) and has a lower xG per 90 (0.33) than earlier in the season. It could be regression, it could be fatigue, or it could just be a small blip in an otherwise impressive season. However, these numbers suggest that if you are looking at a Leeds asset, Raphinha is your man.

Which fixtures should be targeted?

Please note the all data in the article is based on the past five gameweeks unless stated otherwise.

Based on the above graphic, Tottenham, Chelsea, Leeds and Everton have the best matchups this week. In particular, Leeds and Tottenham look to have great fixtures from both a defensive and offensive point of view.

Beginning with Leeds who face a home match against Sheffield United. As you can see on the graphic, Sheffield United have seemingly resigned to relegation in recent weeks. Their dire form has gone from bad to worse. The Blades have the worst xGC in the league by some distance (13.08), and have conceded a startling 22 big chances in that time. That is over 4 big chances per game.

From an attacking perspective, Sheffield United have the rank 19th for xG (3.55), the 19th for number of shots (3), and 20th for shots on target (8). In that time, they have only scored 1 goal, the joint lowest in the division (alongside West Brom). Even though Leeds are far from comfortable at the back, ranking 16th for xGC (9.03), you would fancy them to keep Sheffield United out.

From an attacking point of view for Bielsa’s men, they are creating enough chances, boasting the 7th highest xG in the league (8.04), but only scoring 5 in that time. Cooper and Bamford notably missed a few big chances. According to the stats and the eye test, this fixture appears the standout for a number of reasons.

That being said, Leeds’ home pitch continues to be a mess, and this may play into the hands of Sheffield United. At home, Leeds are only averaging 1 big chance created over the last 3 games and only 1.12 xG per 90. They definitely appear better on the road as of late.

The reason for covering Leeds’ defensive chances this gameweek is the possibility of Dallas being a captaincy option (see later), however, as Spurs’ backline is difficult to predict and lacking an OOP option, I will mainly consider their offensive potential this week, in their match against Newcastle.

Their opponents, Spurs, have been quite potent of late – but they are still underwhelming considering the attacking talent they have. Despite playing an extra fixture than most, they rank 5th for xG (8.51), 4th for big chances (12), and 8th for shots in the box (41). They are getting a few clear cut chances per game, but are not creating a plethora of chances. That being said, when captaining Kane or Son, one big chance is enough.

Who wins the Captaincy Metric?

The winner of the captaincy metric for gameweek 28 is Harry Kane, with Raphinha and Kevin de Bruyne taking 2nd and 3rd respectively.

You can see the results for all candidates in the table below, broken down by their individual and team contributions towards the metric score. For a more detailed understanding of how the metric is calculated, please click here.

Based on the metric calculation, Harry Kane is the player most likely to score FPL points this week. Individually he is in great form, while the team are also performing well and creating a couple of big chances per game. The fixture also carries some weight, with Newcastle one of the easiest opponents for the captaincy options this week.

Another combination of fine form and fixture strength is Raphinha, who only just misses out this week on the top spot. De Bruyne takes third spot due to his recent incredible numbers and Man City’s continued dominance. If you fancy form over fixtures, he could be a fantastic option.

I personally think we will see Harry Kane over 150% effective ownership once again. He is in brilliant form, on penalties, and facing an average Newcastle defence at the very best. Whilst I believe he is probably in the top 3 options for captaincy this week, I am eyeing up the Leeds vs. Sheffield United game – in particular, Raphinha.

I captained him in GW29 against the Harry Kane template and he scored 8 vs. Kane’s 7. I fancy him to outscore Kane again this week, although I could quite easily switch to Spurs’ talisman. For me, it is only between these two this week.

If you are feeling risk-seeking, I think there are three very good defensive punts that would also be toward the top of my list. As discussed previously, due to the metric scoring we do not include defenders, but Dallas, Reguilon and Alonso are all brilliant options this week. I would be confident in a clean sheet with any of these three players, and they all carry an attacking threat.

Any of the Chelsea attackers provide another route to points this week, but apart from Mason Mount (who has recently been rotated) it is difficult to predict who will play, and who will play where. I like Havertz as a captaincy option, but only if you already own him. I also like Calvert-Lewin as an outside punt. His stats aren’t fantastic, nor are Everton’s, but Crystal Palace is an enticing fixture and I do fancy him to get at least one good chance.